Our 21st century world is about "change". Technology is accelerating at a mind-boggling pace, with consequences both good and bad. A variety of buildings and homes will still have to be built as long as businesses & populations grow, and demand for new spaces continues. As we build more and spend more of our time indoors, it becomes imperative that architectural design prioritizes both the nurturing of the users physical and psychological needs, as well as safeguarding our planet.

We are Metaspace. We as an architectural design consultancy, strive to develop projects which bridge the gap between the built and natural environment.

Our mantra is 'Towards Holism'. Where "Holism" seeks to address every element of building – from the multiple and immediate needs of our clients to the long term needs of humanity. And all of this has to be made possible with technologies and systems that are both efficient and flexible - those that reflect the fast changing world we live in.
Read more..

The health and well-being of both the people who inhabit our buildings and the environment our buildings inhabit, Biophilic design and environmental sustainability are the foundations on which our practice is built.

We do not design our buildings to exhibit any particular "style". We do not advocate historical precedent, nor, at the other extreme – do we subscribe to short-lived design fads and the "isms" that seem to sprout in ever increasing numbers. We stay away from all the distracting noise that pervades the design space, instead opting for a simple and timeless elegance that is dictated by function, technology, human and environmental wellbeing and logic. Our practice also takes pride in ensuring that every detail down to the last bolt is “designed” as we believe that bold and exciting conceptual ideas without intelligent detailing is only half a solution.

We believe that Form and Function are equal partners in our design solutions. Neither is less important, but form evolves from the functional exigencies of space, structure and detail rather than being an aesthetic priority that is an end in itself.

Man has evolved over thousands of years in the midst of nature. What this means is that we are genetically programmed to be at our best in the presence of nature. All our buildings, therefore, prioritize the connection with the "outside". We advocate the extensive use of openings which bring in natural light and air while allowing the occupant, views of space and nature. Plants and water both internally and externally are central to our designs as they make crucial contributions both psychologically and physiologically to keeping us happy and healthy.
Read more..

Equally important is our respect for the planet we live on. "Net-zero" is our holy grail: to have no external inputs into our buildings, and no outputs. We are not there yet, but we get closer every year with new ideas and new technologies. We advocate the extensive use of solar energy, state-of-art energy conservation & control technologies, water harvesting & recycling, and waste & garbage treatment in all the buildings we design. An important part of our practice is focused on developing novel planning solutions and construction systems that leave behind conventional time and labour intensive methods. Easy, repeatable constructability and extreme flexibility for the clients are priorities we are actively working on.

All of life is an evolutionary process - and Architecture is no exception, both because new technologies and new materials are continuously being invented, and because user requirements are constantly changing and evolving. We believe that our design solutions have to build in a large amount of nimbleness and flexibility and should have the ability to be responsive to change easily and quickly. In a period of human civilization that is seeing ever- accelerating rates of change, we believe architects have a responsibility to " future proof " a clients investment by offering them very easy paths to upgradation.

The meaningful practice of Architecture in Metaspace is inherently infused with one overarching goal: to push the envelope. What drives and excites us is the continuous search for new solutions – not for the sake of being” different”, but because we believe that every new day is an opportunity for us to improve on what we had done the previous day, and that new problems and technologies call for new ideas rather than the regurgitation of decades old ways of doing business.

And yes, we WANT to be excited everyday - because it is that excitement that fuels innovation

Our principal architect, Jacob George's works have been featured both in press-media as well as in architectural publications. Inside Outside magazine had declared him "Architect of the year 2005" and The Hindu recognizes us as one among the few "new-age" practices in Kerala, India.You can read more about this in our news section. 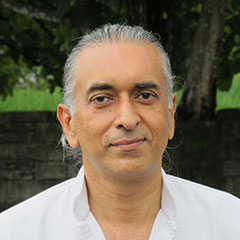 Education :
Bachelor of Architecture, School of Planning and Architecture, New Delhi,1979
Thesis : Design of a “Self-Sufficient floating community” for the oil workers on Bombay High - where the use of multiple solar, wind and wave based energy systems, and sewage and garbage recycling were explored.
Master of Architecture, Pratt Institute, New York City,1990
Thesis : "Holism in architecture", where architecture was taken beyond its standard boundaries and various other inputs were explored.

Other facts :
He has been working on various innovative product design projects including penalized building systems, windmills etc.
Designer of Rethm series of “high-end” loudspeakers, which has received international acclaim and has been featured in many audio shows abroad.
www.rethm.com
Recipient of Inside Outside - Designer of the year, August 2005
Published in the book “Contemporary Indian Architects” by Jagan Shah,2008
Published in the book “Architecture in India since 1990” by Rahul Mehrotra

Born and raised in Singapore, Jacob George completed his GCE “O” level from Anglo-Chinese School and then left for New Delhi to do his architecture.
After graduation, and working for 4 years, he went to New York City to pursue graduate studies in architecture, after which he worked in the US for several years. He came back to India as a partner in an established practice in Cochin, and started his own firm in 2013.
While architecture is his principal pursuit, Jacob also has a second business: he designs and manufactures high end speakers. This factory is also located in Cochin. The factory also produces furniture and interior products, as Jacob works as an industrial designer as well.

Born and raised in Singapore, Jacob George completed his GCE “O” level from Anglo-Chinese School and then left for New Delhi to do his architecture.
After graduation, and working for 4 years, he went to New York City to pursue graduate studies in architecture, after which he worked in the US for several years. He came back to India as a partner in an established practice in Cochin, and started his own firm in 2013.